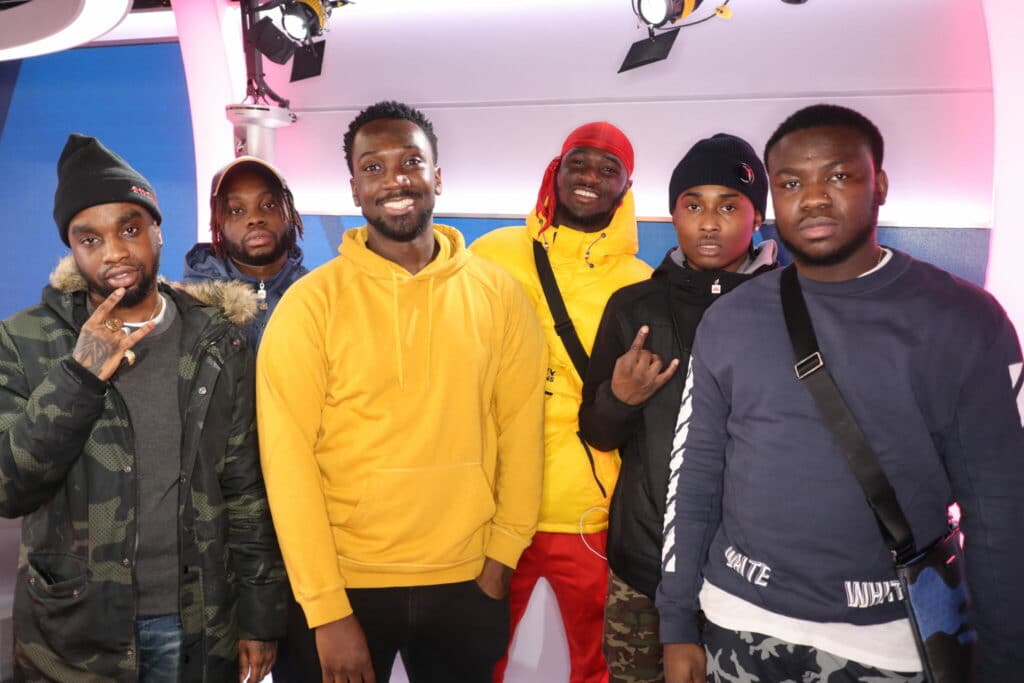 I spoke to 5 of the 6 Hackney rockstars about how nobody can make the music they make, the attention they’ve received since their recent bangers and plans for their upcoming tour.

Since their first hit ‘Yo Darlin’ the centre stage has been a comfortable place NSG. Not only did the song take over the radio and clubs scenes Papi Abz, part of the NSG crew, states to this day no one has made a song there hasn’t been another song like it.

My earliest memories of NSG comes from their Wine and Kotch Afrobeats remix (2013). At a time where US Rap, Afrobeats and Bashment owned most of the raves I went to I could see what they were trying to do, but I wasn’t sold on it.

In the years before the UK Afro scenes had laid it’s foundations. Artists/Djs such as Mista Silva, Kwarmz and Flavour, Afro B and P Montana built the underground scene while the likes of Fuse ODG and D’banj (international) took the afrobeats sound mainstream.

Moving forward the infrastructure for the sound developed, one or two tracks in the mix turned into longer sets and wider audiences began to take into the sound.

With more artists starting to making Afro-influenced music NSG continued to develop their lane, releasing some of my favourite tracks, Jo, Love & Affection and Atad3.

As well as building on their Afrobeats roots (tracks like Owo and SNEH) from 2016 we saw different collaborations and sounds come from the group (Alright ft Ryan De La Cruz). There was a slight back and fourth with a similar, some say rival group, CXCV and more music but another stand out track for was We Dey featuring Kilo Keemzo.

We spoke about it in the interview above, the track really encapsulated who they were, where they were coming from and the message they were giving out. Although it wasn’t the most polished song, I think what the track represented was a good corner stone to put down in terms of their heritage.

NSG continued to build their fan base releasing more tracks with consistent quality and by summer 2017 the UK music scene as a whole had came to a very healthy place. One of the leading producers of the popular sound was Jae5. By no means new to the game, or working with NSG, Jae5 had already produced the J Hus smash ‘Did You See’ and executively produce the debut album ‘Common Sense’ before Yo Darlin.

While the song was in circulation it felt like a track that got better every time you listened to it. Melodic and still cool, you could sing along, dance to and rap the direct and relatable hook. The production was tight and the Geko feature pushed the songs to spaces and fanbase that hadn’t been reached before. The song dropped in June and I got the boys in the studio for my first professional radio interview in August 2017.

In the next year to come again NSG maintain the level to which they made music. Without compromising their foundations the boys pushed their sound on the original fans as well as their new mainstream audience.

I’ve had the privilege of seeing their performances at different shows and this is one of the spaces I think they thrive most. You always get your moneys worth when they perform.

After a little bit promo in November 2018 we final got the track all the fans were waiting for. Options featuring Tion Wayne connected instantly. The song first entered the charts no. 80 on the 10th of January before climbing to 25 the following week. In the time since its release fans started their own viral Options challenges which definitely helped, but behind all of the hype the song is still very good.

Options spent a further five weeks in the top 20s, missing out the top 10 to Post Malone by 166 sales. But on 28th of February they reach number 9 as an independent 6 man group from Hackney. Check out the full interview above!